Preserved remnants of registration card files of Jews in the Protectorate Bohemia and Moravia open important questions of the state of Holocaust documentation as well as of the deployment of modern technology in registering and deporting European Jews. This post analyses the history and structure of the WWII central card file held today at the Federation of Jewish Communities of the Czech Republic.

Much was already written about using contemporary arts disciplines and medical scientific approaches by the Nazi regime to manage the economic value of man. Besides disciplines such as eugenics or statistics, the new prospect was seen in automation of gathering and sorting of information which became an instrument for mass extermination of undesirable minorities who allegedly jeopardised the national body of Nazi Germany. Jews, Roma, homosexuals and other minorities were systematically separated as racially inferior, unproductive and nationally useless. Systematic recording and bureaucratic exclusion of Jews began in Germany with the census of 1933, tracing their biological and social conditions.1 From 1938 onwards, wherever the Germans invaded foreign countries, police and security services immediately started to record, count and separate Jews and other “inferior minorities”. All territories seized by Nazi Germany became acquainted with a new technology of punch cards and a card sorting system in order to automatize human destruction.2

The analysis of the card files of the Jewish population in the Protectorate Bohemia and Moravia starts with destruction and void. The majority of the cards from the registration card file did not survive World War II. With the end of the war approaching, while Nazis were covering up the traces of the “Final Solution”, cards of the deported people were systematically destroyed along with other documentary material. Neither the related documents of the SS, especially of the Central Office for Jewish Emigration in Prague (Zentralstelle für jüdische Auswanderung Prag / Ústředna pro židovské vystěhovalectví v Praze), nor the larger part of the materials of the Jewish “self-government” have been preserved.

Immediately after the war, its remnants became part of the newly established Auxiliary card file and the Central card file which merge pre-war and post-war cards. Since the cards of deportees were continuously discarded and destroyed, the contemporary Central card file consists mostly of cards of mixed-marriage Jews, hidden persons, of those who died in the Theresienstadt ghetto, etc. Later on, data from transport lists were added. Thus, the Central card file contains of more than 160 000 cards of various types3, mostly created after WWII.

For the purpose of this blog contribution, I have decided to focus on the remnants of the original war-time registration card file even though we know only little about its creation and original design. Original registration cards file which were preserved are the so-called Hollerith cards, i.e. cards designated for machine processing. In short, machine processing of cards represented a modern technological system turning statistical data into holes and columns. For this purpose, the Dehomag machines (Deutsche Hollerith Maschinen Gesellschaft) were distributed all around the Third Reich and Nazi occupied territories, leased, maintained, and serviced by the IBM Company.4 Although we know that this system played a significant role in identifying Jews, statistical sorting and transportation, very little is known about its utilisation on the territory of the Protectorate. Registration cards were kept at the Central Office for Jewish Emigration in Prague. As might be seen on the preserved cards below, the holes were never punched and stamps were used instead. But it is conceivable that the Nazis made, or intended to make, some use of the holes and the automation. Identification of all hole windows on particular cards stays mostly unclear and we can barely say whether and how these were used. The central card file offers only several preserved types of original registration cards:5

Cards of mixed-marriage couples and of people with a disputed status (e.g. cards of persons proving they have no “Jewish origin”) 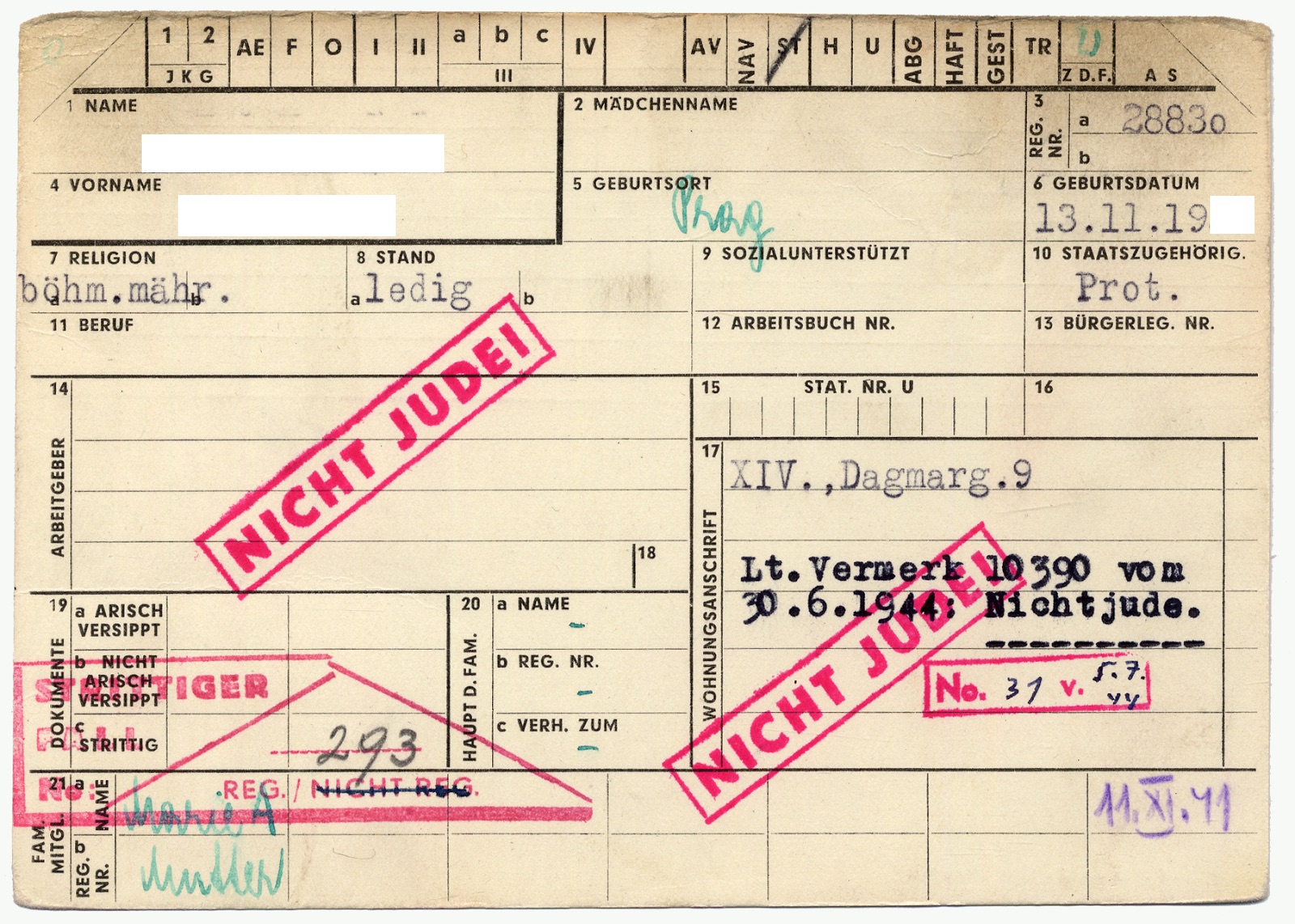 See fullscreen visualisation of the cards stamped with Haft

The card file itself was created in September 1939 to record the Jewish population on the territory of the Protectorate. Established by order of the Central Office for Jewish Emigration in Prague, it was managed by the Jewish Religious Community in Prague.

Even more systematised card files which now also included those “Jews” who weren’t members of the Jewish Religious Community started in March 1940. Even though the card file was continuously updated and expanded, it soon proved to be inadequate as it did not record things like family relations and those who didn’t considered themselves Jewish by religion – the so-called B-Juden. Therefore, at the order of the Central Office for Jewish Emigration in Prague, yet another registration of all the Jews in the Protectorate was started in October 1941 by the Jewish Community in Prague. It had to be done in the shortest amount of time possible. The first step was to gather all so-called name lists, i.e. lists of all Jews registered at various Jewish communities, which were made based on partial card files. Individual communities were also assigned numerical groups (e.g. the numerical group for Prague was 1-50 000, numbers starting from 150 000 were added later) and serial numbers in the name lists also served later as registration numbers.6 The Card File Department kept family card file, card file of deported persons, and the so-called card file stamped abgängig (missing / in Czech slang “potápky” the sunk ones) – persons who resorted to illegality.7

Every single registration card contained the following information: registration number, surname, first name, date of birth, citizenship, number of children, marital status, profession, address, the information whether the person lived in a mixed marriage, details of assets (real estate, cash, bank cash, receivables, securities, jewellery, furniture and everyday objects, mortgages, debts, passport, occupation and special expertise). On the reverse, the cards recorded names of family members – their registration numbers, birth dates, and, if there were any, details concerning cohabitation. In Prague, the registration was completed by the end of November 1941, and was followed by the registration of Jews of other Jewish Communities in the territory of the Protectorate. In some “Oberlandrat” districts, the registration has been completed within a few days. Employees of the Registration Department recorded all population status changes: birth, death, marital status, address changes.

See fullscreen visualisation of the cards stamped with Haft

An integral part of the apparatus was a Search Service which, together with the Protectorate Police, searched for those who tried to conceal their origin and avoid the transports – people marked as “abgängig”.10

As evidenced from this blog post, up until now, we know very little about registration card files and their processing, which were used by the Nazis’ bureaucratic apparatus in the territory of the Protectorate of Bohemia and Moravia. Simultaneously, original Hollerith cards preserved in registration card files represent silent witnesses of modern automation technology used by Nazi authorities to gather and utilise coveted information about the Jewish population at the time. 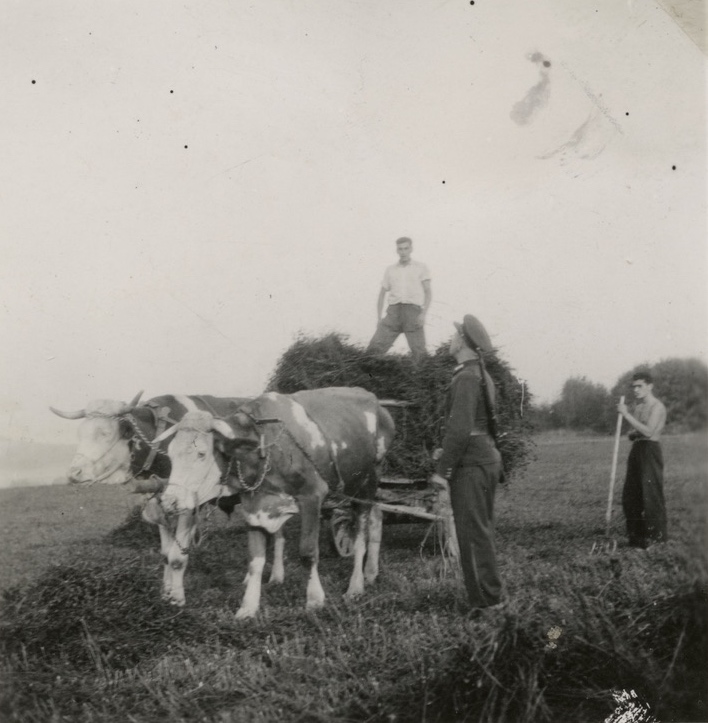 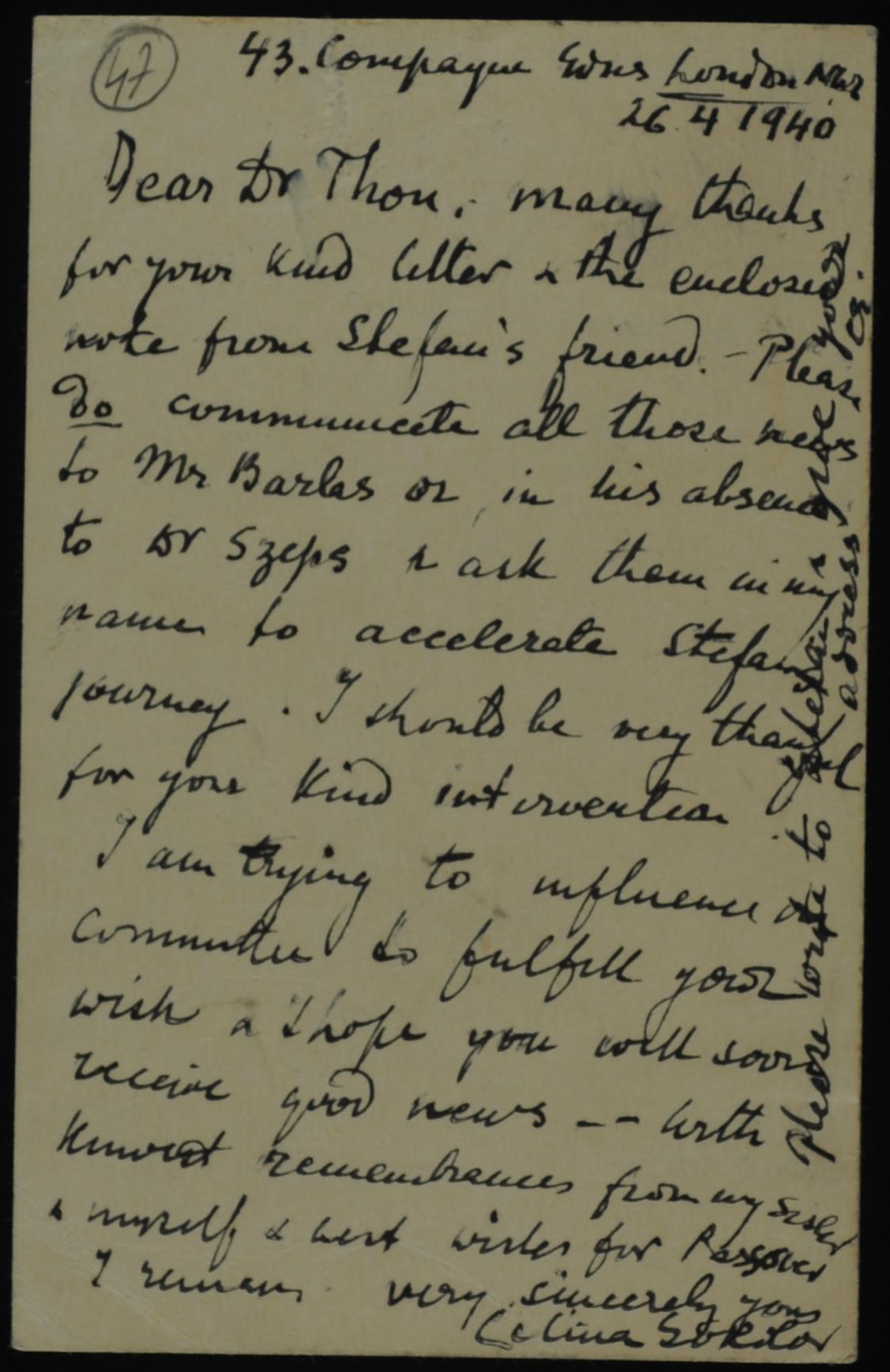 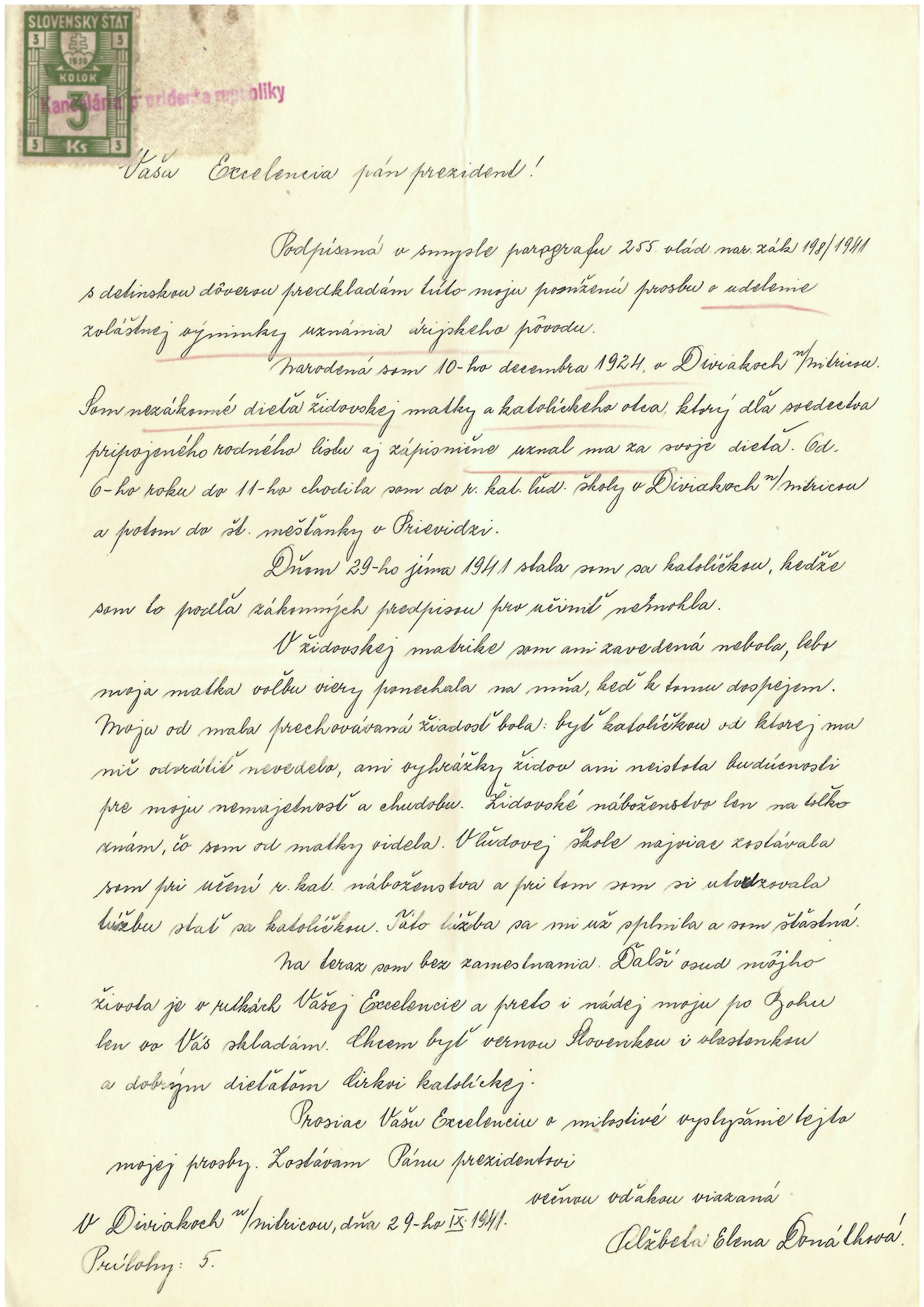