During the Second World War the Terezín/Theresienstadt Ghetto was one of the major sites of suffering and death for the Jews of the Bohemian Lands and several European countries including Germany, Austria, Netherlands, Denmark, Luxemburg and others. Of approximately 150,000 prisoners, over 30,000 died there between 1941 and 1945 due to starvation, poor hygiene conditions, overcrowding and disease. Another 90,000 were deported to the ghettos and extermination camps in the East, from which only roughly 4,000 returned. The Terezín Ghetto is also known for its cultural life, education of children and for the misuse of the ghetto for Nazi propaganda purposes.

The daily life of the ghetto inmates was determined by rules and regulations that were announced via the “daily orders” (Tagesbefehle). These orders therefore give an insight into all areas of the life in the ghetto, such as orders by the SS, announcements and orders by the so called “Jewish Self-administration” (Jüdische Selbstverwaltung), the announcement of transports to the East and the constant issues (disease, death, forced labour, etc.) the inmates were challenged with. Starting in December 1941, the daily orders were produced on an almost daily basis, later they were published every few days. The documents contain comprehensive information covering information on places within the ghetto and important events and transportations as well as information on the fate of inmates in the Terezín Ghetto. During the “city beautification” (Stadtverschönerung), the daily orders were renamed the “Daily Bulletins of the Jewish Self-administration” (Mitteilungen der Jüdischen Selbstverwaltung). The daily orders were issued by the Council of the Elders and also give an insight into the extensive bureaucracy of the Council of the Elders with it’s huge number of departments, sub­departments and units.

The surviving daily orders were scattered through various archives including the Jewish Museum in Prague, the Terezin Memorial, Yad Vashem Archives or the Archive of Beit Theresienstadt in Israel. The online collection of the daily orders and bulletins of the different archives within the EHRI project offers the user an insight into approximately 500 documents from one of the most important sources from Terezín Ghetto.

Please follow the link for the EHRI collection description:

The Order of the day by the Council of the Elders no. 81

The order of the day by the Council of the Elders no. 81 dated March 22nd 1942 demonstrates the breadth of information available within the daily orders. This example shows how – until September 1942 – those who died were listed by name. Due to the high number of deaths this ceased to be the practice afterwards.

It also lists the categories of people who might be eligible for removal from the transport list.
Also common, the daily order no. 81 lists people who had sentences passed against them by the Ghetto Court which was established to decide matters relating to the ghetto legal system set up by the Council of the Elders. People’s addresses in the ghetto are also listed.
This particular example of a daily order also lists births that had taken place in the ghetto.

See fullscreen visualisation of the Order of the day by the Council of the Elders no. 81

Until May 1942 Terezín served exclusively for the “ghettoisation” of Jews from Bohemia and Moravia. Even though the deportation of 88,000 Jews from this occupied territory started in October 1941 with five thousand people sent to the ghetto in Łódź, the majority of the Jews living in the “Protectorate” were deported to Terezín. On 24th November 1941, the first transport with 342 young men arrived from Prague, the so-called “Aufbaukommando” (“Construction Commando”). Their role was to carry out the first round of adaptations to the site in order to make sure that the town could absorb more prisoners.

Starting with 1942, the ghetto was chosen for deportation from the German “Reich” and from other occupied countries. From May 1942 onwards, the first transports began to arrive in Terezín from the “Old Reich” (Germany) and the “Ostmark” (Austria), increasing the average age of the prisoners to the point where 44.7% of all prisoners were over 65 years old by July 1942. Overcrowding and inadequate hygiene facilities led to the outbreak of disease and epidemics. This also led to a continuous rise in the number of prisoners, reaching its peak of 58,491 on 16th September 1942. At the same time, September 1942 also saw the highest mortality rate, with 3,941 people dying that month.

While transports from the “Protectorate”, Austria and Germany continued, the first transport carrying Dutch Jews arrived in Terezín on 22nd April 1943. Altogether, 4,969 Dutch Jews would be imprisoned in Terezín. A further three transports also saw the arrival of 456 Danish Jews in the ghetto. After the Nazi occupation of Slovakia in 1944, four transports with 1,200 Slovak Jews arrived from the interment camp in Sereď.
While new prisoners were continuously arriving, many transports were dispatched from the ghetto to the East. The first two transports left in January 1942 and shattered the illusion that Terezín would really be a final destination and provide protection from deportation to the East. Prisoners lived in constant fear of receiving – at night – strips of paper with their name and transport number as a summons to a transport to the East.

The first series of deportations between January and September 1942 saw 23,000 prisoners deported to ghettos and camps in Riga, Izbica, Piaski, Rejowiec, Lublin, Warsaw, Zamość, Ossowa, Trawniki, Maly Trostinets, Baranovici and Raasika. From the end of October 1942, most of the transports from Terezín were dispatched to Auschwitz-Birkenau.

The rich cultural life and artistic output by artists, composers and writers in the most difficult conditions, as well as the care that prisoners managed to provide for children in the children homes and the numerous made Terezín seemingly unusual. This often obscures the harsh reality of the camp conditions and the hopelessness of everyday life in the ghetto.

The Terezín Ghetto was used for propaganda reasons including a “city beautification” of the ghetto when about 28,000 ghetto inmates were sent into
the East in order to give the impression that the ghetto was not overfilled. The SS also ordered the production of a (second) propaganda film about Terezín, which the prisoners were forced to produce themselves.

On 23rd June 1944, representatives of the International Committee of the Red Cross visited Terezín. The group was guided along a predetermined route through the “beautified” ghetto. From the Nazi perspective the visit was a complete success: the report completed by Maurice Rossel depicted the life of prisoners in a largely positive way.

Between 28th September and 28th October 1944, 18,402 prisoners were deported to Auschwitz on transports leaving on a daily basis. These transports were meant as a partial liquidation of the ghetto and were supposed to prevent any armed resistance by young prisoners. By October 1944 there were only 11,000 – mostly older – people still left on the ghetto.

On 5th May, Paul Dunant of the International Committee of the Red Cross took over command of the camp when the SS guards left. The 8th of May saw the arrival of the first Red Army units who would eventually liberate the ghetto. However, the liberation of the ghetto did not necessarily mean the end of the prisoners’ suffering. More than 150,000 people were deported to Terezín between 1941 and 1945. A not-insignificant number of the 17,000 people still there at liberation died from disease shortly afterwards. 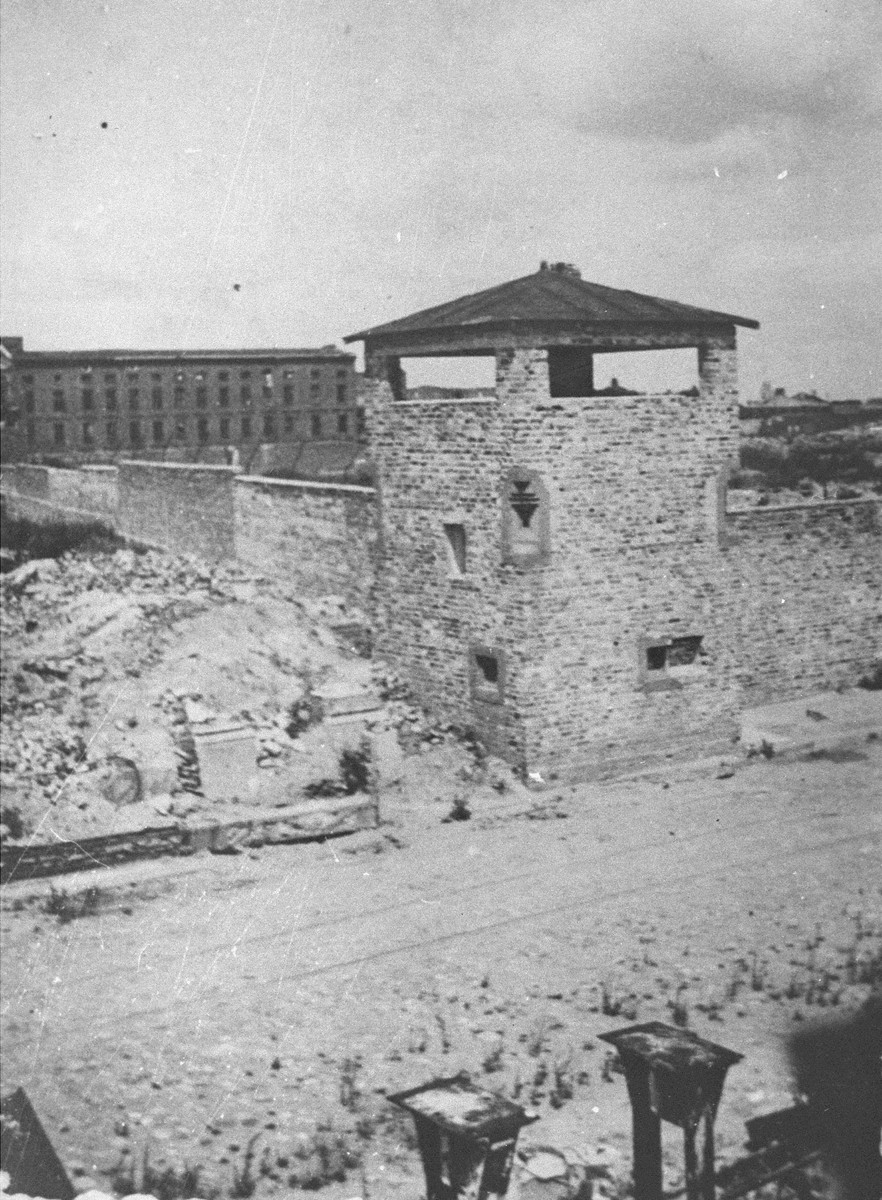 Authors: Zoltán Vági and Gábor KádárNovember 14, 2019
“We were clearing up the ruins of the devastated Warsaw ghetto…While clearing the rubble, we found many dead bodies. Despite the [Germans’] ban, we gave them a burial. Some had knives and weapons in their hands” – remembered 19-year-old Hungarian Jewish survivor, József Davidovics in 1945. Roughly a year after the Warsaw ghetto revolt was Read More